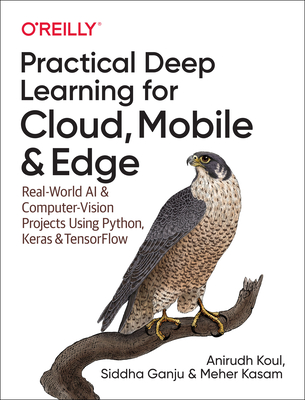 Whether you're a software engineer aspiring to enter the world of artificial intelligence, a veteran data scientist, or a hobbyist with a simple dream of making the next viral AI app, you might have wondered where do I begin? This step-by-step guide teaches you how to build practical applications using deep neural networks for the cloud and mobile using a hands-on approach.

Relying on years of industry experience transforming deep learning research into award-winning applications, Anirudh Koul, Siddha Ganju, and Meher Kasam guide you through the process of converting an idea into something that people can use in the real world. Train, optimize, and deploy computer vision models with Keras, TensorFlow, CoreML, TensorFlow Lite, and MLKit, rapidly taking your system from zero to production quality.

Anirudh Koul is the Head of AI & Research at Aira, and was previously at Microsoft AI & Research where he founded Seeing AI - the defacto app used by the blind community worldwide. With features shipped to about a billion people, he brings over a decade of production-oriented applied research experience on petabyte-scale datasets. He has been transforming ideas to reality using AI for Augmented Reality, Robotics, Speech, Productivity as well as building tools for people with disabilities. His work, which the IEEE has called 'life changing', has been honored by CES, FCC, Cannes Lions, American Council of the Blind, showcased at events by UN, White House, House of Lords, World Economic Forum, TEDx, on Netflix, National Geographic, and applauded by world leaders including Justin Trudeau and Theresa May.

Siddha Ganju, who Forbes featured in their 30 under 30 list, is a Self-Driving Architect at Nvidia. Previously at Deep Vision, she developed deep learning models for resource constraint edge devices. A graduate from Carnegie Mellon University, her prior work ranges from Visual Question Answering to Generative Adversarial Networks to gathering insights from CERN's petabyte-scale data and has been published at top-tier conferences including CVPR and NeurIPS. Serving as an AI domain expert, she has also been guiding teams at NASA as well as featured as a jury member in several international tech competitions.

Meher is a seasoned software developer with apps used by tens of millions of users every day. Currently at Square, and previously at Microsoft, he shipped features for a range of apps, from Square's Point of Sale to the Bing app. He was the mobile development lead for Microsoft's Seeing AI app, which has received widespread recognition and awards from Mobile World Congress, CES, FCC, American Council of the Blind to name a few. A hacker at heart with a flair for fast prototyping, he has won close to two dozen hackathons and converted them to features shipped in widely-used products. He also serves as a judge of international competitions including Global Mobile Awards, Edison Awards.