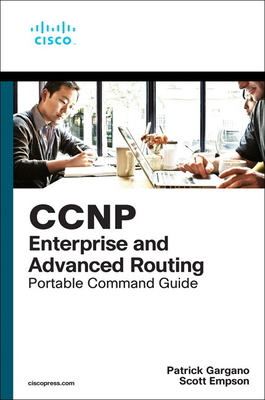 This popular format lists all of the commands that are required to pass the objectives of the exams. Throughout the books there will be Configuration Examples given to the reader, which will have a diagram of a network, and then command outputs, showing all of the commands needed to create the network, showing what commands to use, where to use them, and a brief description of why we are using the commands.

Scott Empson is an instructor in the Department of Information Systems Technology at the Northern Alberta Institute of Technology in Edmonton, Alberta, Canada, where he has taught for over 21 years. He teaches technical courses in Cisco routing and switching, along with courses in professional development and leadership. Scott created the CCNA Command Quick Reference in 2004 as a companion guide to the Cisco Networking Academy Program, and this guide became the CCNA Portable Command Guide in 2005. Other titles in the series in the areas of CCNP, Wireless, Security, Microsoft, and Linux followed beginning in 2006. Scott has a Master of Education degree along with three undergraduate degrees: a Bachelor of Arts, with a major in English; a Bachelor of Education, again with a major in English/language arts; and a Bachelor of Applied Information Systems Technology, with a major in network management. Patrick Gargano has been an educator since 1996, a Cisco Networking Academy Instructor since 2000, and a Certified Cisco Systems Instructor (CCSI) since 2005. He is currently based in Australia, where he is a Content Development Engineer at Skyline ATS, responsible for CCNP Enterprise course development with Learning@Cisco. He previously led the Networking Academy program at College La Cite in Ottawa, Canada, where he taught CCNA/CCNP-level courses, and he has also worked for Cisco Learning Partners Fast Lane UK, ARP Technologies, and NterOne. In 2018 Patrick was awarded the Networking Academy Above and Beyond Instructor award for leading CCNA CyberOps early adoption and instructor training in Quebec, Canada. Patrick has also twice led the Cisco Networking Academy Dream Team at Cisco Live US. Patrick's previous Cisco Press publications include the CCNP Routing and Switching Portable Command Guide (2014) and 31 Days Before Your CCNA Security Exam (2016). His certifications include CCNA (R&S), CCNA Wireless, CCNA Security, CCNA CyberOps, and CCNP (R&S). He holds Bachelor of Education and Bachelor of Arts degrees from the University of Ottawa, and is completing a Master of Professional Studies in Computer Networking at Fort Hays State University (Kansas).