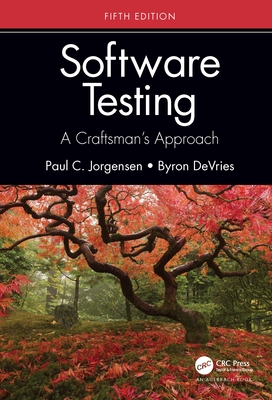 This updated and reorganized Fifth edition of Software Testing: A Craftsman's Approach applies the strong mathematics content of previous editions to a coherent treatment of software testing. Responding to instructor and student survey input of previous editions, the authors have streamlined chapters and examples.

Thoroughly revised and updated, Software Testing: A Craftsman's Approach, Fifth Edition is sure to become a standard reference for those who need to stay up to date with evolving technologies in software testing. Carrying on the tradition of previous editions, it is a valuable reference for software testers, developers, and engineers.

Paul C. Jorgensen, Ph.D., spent 20 years of his first career developing, supporting, and testing telephone switching systems. Since 1986, he has been teaching graduate courses in software engineering, first at Arizona State University, and then at Grand Valley State University. As of August 2017, he became a Professor Emeritus of Computer Science at Grand Valley State University. He claims he is not retired, he just has a 7-day weekend, every week. Paul is a co-author of two McGraw-Hill books (1970 and 1992). In addition to his software testing book, he is the author of two other CRC Press books: Modeling Software Behavior-A Craftsman's Approach and The Craft of Model-Based Testing. He has reactivated his consulting practice, Software Paradigms, working with companies in Europe and North America.
Byron DeVries, Ph.D., currently teaches graduate and undergraduate courses in software engineering at Grand Valley State University. Previously, he directed the testing of flight-worthy avionics software during his 12-year career in the aviation systems industry. His research interests are the in the modeling and verification of high-assurance adaptive cyber-physical systems.