MTConnect To Measure Is To Know 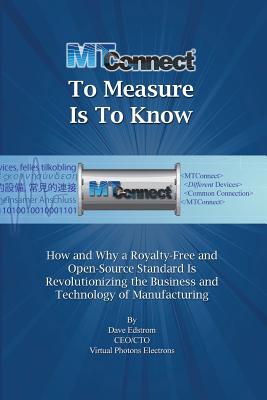 This book answers the question, "how and why a royalty-free and open source standard is revolutionizing the business and technology of manufacturing." This is the world's first book on MTConnect and open systems. This book is not just about MTConnect, but it is first a book that discusses the many lessons learned in the world of open systems. MTConnect will be more important in the 21st century for manufacturing than CNC was for manufacturing in the 20th century. -John Byrd Former President of AMT - The Association For Manufacturing Technology I am very glad to see that MTConnect continues to thrive and has become a true game changer for manufacturing. I enjoyed working with Dave on MTConnect and believe this book, MTConnect: To Measure Is To Know, is a great way to learn not only about MTConnect, but also to understand the important principles and lessons learned from open systems that Dave shares with the reader. -Dave Patterson David A. Patterson joined the faculty of the University of California, Berkeley, in 1977. He is holder of the E.H. and M.E. Pardee Chair of Computer Science and is a member of the National Academy of Engineering and the National Academy of Sciences. Sun Microsystems forever changed the world of computing in many significant ways. Dave's book, MTConnect: To Measure Is To Know, is a great way to not only learn about this game changing technology called MTConnect, but to understand how the open system principles, that we believed so strongly in at Sun Microsystems, can be applied to manufacturing. -Scott McNealy Co-Founder, President and Chairman of the Board for Sun Microsystems

Dave Edstrom is the CEO/CTO for Virtual Photons Electrons, president and chairman of the board for the MTConnect Institute and has been in the computer industry for more than 34 years. Dave worked for Sun Microsystems for almost 23 years in a variety of leadership positions. Dave has held a variety of positions ranging from an assembler programmer, technical management, system engineer, chief technologist, technical director, and principal engineer for a variety of companies. Dave has been working with Unix since 1981. From 1987 to 2010 Dave was with Sun Microsystems in a variety of technical leadership roles. Dave was the Chief Technologist for the Sun Microsystems Software Practice from 2004 through 2010. Dave has been a key contributor to the MTConnect standard from its inception. Dave, along with Dr. David Patterson of University of California at Berkeley, planted the seed and laid the foundation for MTConnect at the 2006 Association for Manufacturing Technology's (AMT) Annual Meeting at Lake Las Vegas, Nevada. Dave has had the privilege of working with Paul Warndorf, VP of technology for AMT, who is the true leader of MTConnect; Will Sobel, president of System Insights and the chief architect of MTConnect; John Turner, director of Technology for FA Consulting and Technology (FAC&T), who is the shepherd for the MTConnect Standard; John Byrd, president of AMT during the initial years of MTConnect and a thought leader in manufacturing; and most importantly, Doug Woods, president of AMT, who is a true visionary who is redefining manufacturing and was the chairman of the board at AMT at the beginning of MTConnect and now as president of AMT continues to personally drive MTConnect to be a reality. Since early in 2010, Dave has been working as a consultant for AMT as the director for the Office of Strategic Innovation working primarily in two areas - MTConnect and MTInsight (manufacturing business intelligence platform). Dave was named president and chairman of the board for the MTConnect Institute in May 2010 and continues in that role today. The reader can also go to http: //ToMeasureIsToKnow.com for updates.