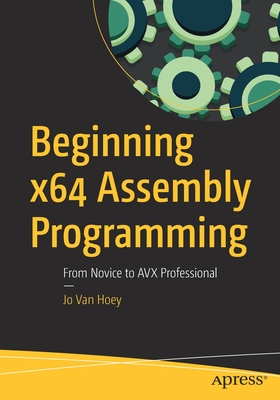 Program in assembly starting with simple and basic programs, all the way up to AVX programming. By the end of this book, you will be able to write and read assembly code, mix assembly with higher level languages, know what AVX is, and a lot more than that.
The code used in Beginning x64 Assembly Programming is kept as simple as possible, which means: no graphical user interfaces or whistles and bells or error checking. Adding all these nice features would distract your attention from the purpose: learning assembly language. The theory is limited to a strict minimum: a little bit on binary numbers, a short presentation of logical operators, and some limited linear algebra. And we stay far away from doing floating point conversions.
The assembly code is presented in complete programs, so that you can test them on your computer, play with them, change them, break them. This book will also show you what tools can be used, how to use them, and the potential problems in those tools. It is not the intention to give you a comprehensive course on all of the assembly instructions, which is impossible in one book: look at the size of the Intel Manuals. Instead, the author will give you a taste of the main items, so that you will have an idea about what is going on. If you work through this book, you will acquire the knowledge to investigate certain domains more in detail on your own.
The majority of the book is dedicated to assembly on Linux, because it is the easiest platform to learn assembly language. At the end the author provides a number of chapters to get you on your way with assembly on Windows. You will see that once you have Linux assembly under your belt, it is much easier to take on Windows assembly.
This book should not be the first book you read on programming, if you have never programmed before, put this book aside for a while and learn some basics of programming with a higher-level language such as C.

Who This Book Is For
Programmers in high level languages. It is also for systems engineers and security engineers working for malware investigators. Required knowledge: Linux, Windows, virtualization, and higher level programming languages (preferably C or C++).

Jo Van Hoey has 40 years of experience in IT, in diverse functions, multiple IT companies, and multiple computing platforms. He recently retired from IBM, where he was a mainframe software account manager. He has always been interested in IT security and knowledge of assembly language is an essential skill in defending IT infrastructure against attacks and malware.