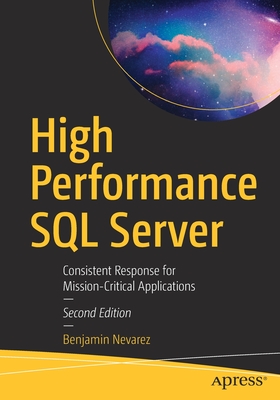 Design and configure SQL Server instances and databases in support of high-throughput applications that are mission-critical. Provide consistent response times in the face of variations in user numbers and query volumes. This new edition has been updated to cover the Intelligent Database and the Intelligent Query Process that is new in SQL Server 2019. Also new in this edition are dedicated chapters on query troubleshooting along with monitoring and diagnostics.
This book shows how to configure SQL Server and design your databases to support a given instance and workload. You'll learn advanced configuration options, in-memory technologies, storage and disk configuration, and more, all toward enabling your desired application performance and throughput. This book is an excellent complement to performance tuning books focusing on SQL queries, and provides the other half of what you need to know by focusing on configuring the instances on which mission-critical queries are executed.
Configuration doesn't stop with implementation. Workloads change over time, and other impediments can arise to thwart desired performance. High Performance SQL Server covers monitoring and troubleshooting to aid in detecting and fixing production performance problems and minimizing application outages. You'll learn a variety of tools, ranging from the traditional wait analysis methodology to the new query store, and you'll learn how improving performance is really an iterative process.
What You Will Learn

Who This Book Is For
SQL Server database administrators, developers, and data architects. The book is also of use to system administrators who are managing and are responsible for the physical servers on which SQL Server instances are run.

Benjamin Nevarez is a database professional based in Los Angeles, California who specializes in SQL Server query tuning and optimization. He is the author of four books: SQL Server 2017 on Linux, High Performance SQL Server, SQL Server 2014 Query Tuning & Optimization, and Inside the SQL Server Query Optimizer, and he has co-authored other books, including SQL Server 2012 Internals. Benjamin has been a speaker at many SQL Server conferences and events around the world, including the PASS Summit, SQL Server Connections and SQLBits. His blog can be found at benjaminnevarez.com and he can be reached on twitter at @BenjaminNevarez and on Facebook.