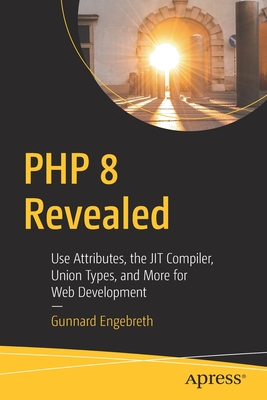 Discover the new and updated features of PHP 8, such as the JIT compiler, union types, and attributes, with code examples of each. For each feature, the author includes real-life cases for its use and explains its benefits.

Gunnard Engebreth began coding at the age of 11 through a "Learning BASIC" book given to him by his father. Technology was changing fast and Gunnard rode the wave from 1200 to 56k baud modems. Logging in to BBSs, Prodigy, Compuserve, Delphi and IRC he could see the world changing and he wanted to be a part of it. He soon got involved in the ansi/demo scene, making several application generators for many groups in the 90's. Visual Basic was the next language of choice allowing him to develop "tools" for online systems such as AOL. This introduced many aspects of development, security and UI while they were still in their infancy. Once the WWW arrived via Mindspring in Atlanta, Ga. Gunnard quickly joined in the race for the web. Learning HTML, PERL and Linux (Slackware at the time) he began to build his skill-set which lead to a full-time Sysadmin position at the age of 20 (2000) at Activegrams/Silverpop. Gunnard has moved around the IT industry from SAN/NAS storage at IBM to custom Wordpress sites for marketing companies, but one thing has stayed the same, a passion for learning and problem solving. Gunnard also DJ's Drum and Bass as Section31, Playing drums and baking bread (doughcode.com).