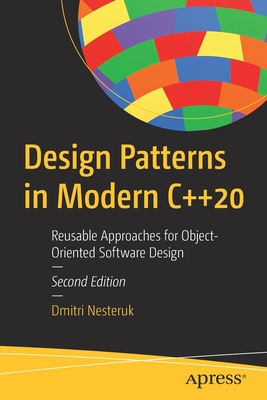 Apply the latest editions of the C++ standard to the implementation of design patterns. As well as covering traditional design patterns, this book fleshes out new design patterns and approaches that will be useful to modern C++ developers. Author Dmitri Nesteruk presents concepts as a fun investigation of how problems can be solved in different ways, along the way using varying degrees of technical sophistication and explaining different sorts of trade-offs.

Design Patterns in Modern C++20, Second Edition also provides a technology demo for modern C++, showcasing how some of its latest features (e.g., coroutines, modules and more) make difficult problems a lot easier to solve. The examples in this book are all suitable for putting into production, with only a few simplifications made in order to aid readability.

This book is for both beginner and experienced C++ developers.

Dmitri Nesteruk is a quantitative analyst, developer, course and book author, and an occasional conference speaker. His interests lie in software development and integration practices in the areas of computation, quantitative finance and algorithmic trading. His technological interests include C# and C++ programming as well high-performance computing using technologies such as CUDA and FPGAs. He has been a C# MVP since 2009.