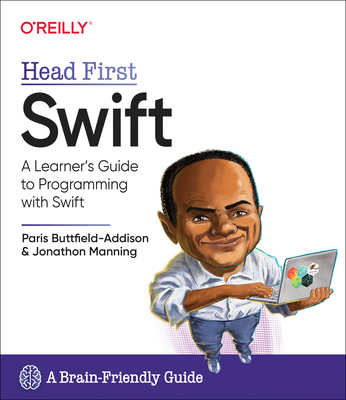 What will you learn from this book?

Apple's new modern programming language, Swift, is slowly becoming the go to language for iOS and OS X development. The language will attract existing developers because of its modern features and prototyping tools, and it will attract new developers because of its less-steep learning curve. That said, Swift is deep, and contains many advanced concepts, constructs, and patterns. Developers need a way to learn these new features and understand them in context. Head First is an effective vehicle for this level of teaching, and Head First Swift is no exception.

Why does this book look so different?

Based on the latest research in cognitive science and learning theory, Head First Swift uses a visually rich format to engage your mind, rather than a text-heavy approach that puts you to sleep. Why waste your time struggling with new concepts? This multi-sensory learning experience is designed for the way your brain really works.

Anthony Gray (but you can call him Tony) has a long history working in tertiary education, where he's provided technical and systems support for academic and research staff, and some very smart students. He loves to teach, with his favorite subjects being Operating Systems, Computer Graphics and Animation with OpenGL, and most recently Mobile Development for iOS. In his spare time, he writes software to scratch his own itch, some of which is available at squidman.net. Secretly he pines for the days when you could hand-code assembler for your 6502, and occasionally writes emulators so he can do just that.

He has co-authored two books on mobile development and enjoys re-implementing such things as OpenGL and the Objective-C runtime (in his spare time).

Jon is also a researcher in Human-Computer Interaction working towards a PhD.

Paris Buttfield-Addison is a mobile app engineer, game designer, and researcher with a passion for making technology simpler and as engaging as possible. Paris recently submitted a PhD investigating how people use tablets for information management.