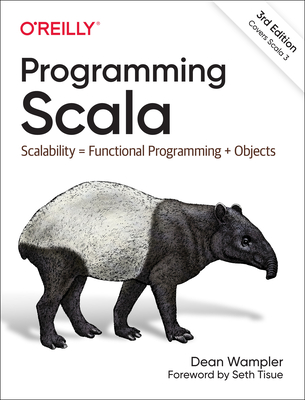 Get up to speed on Scala--the JVM, JavaScript, and natively compiled language that offers all the benefits of functional programming, a modern object model, and an advanced type system. Packed with code examples, this comprehensive book shows you how to be productive with the language and ecosystem right away. You'll learn why Scala is ideal for today's highly scalable, data-centric applications that support concurrency and distribution.

Despite the reinvigoration of Java and the introduction of Kotlin, Scala hasn't been sitting still. This third edition covers the new features in Scala 3.0, with updates throughout the book. Programming Scala is ideal for beginning to advanced developers who want a complete understanding of Scala's design philosophy and features with a thoroughly practical focus.

Dean Wampler (@deanwampler) is an expert in streaming data systems, focusing on applications of ML/AI. He is Head of Evangelism at Anyscale.io, which is focused on distributed Python for ML/AI. Previously, he was an engineering VP at Lightbend, where he led the development of Lightbend CloudFlow, an integrated system for building and running streaming data applications with Akka Streams, Apache Spark, Apache Flink, and Apache Kafka. Dean is the author of Fast Data Architectures for Streaming Applications, Programming Scala, Functional Programming for Java Developers, and the coauthor of Programming Hive, all from O'Reilly. He's a contributor to several open source projects. A frequent Strata Data Conference speaker, he's also the co-organizer of several conferences around the world and several user groups in Chicago. He has a Ph.D. in Physics from the University of Washington.