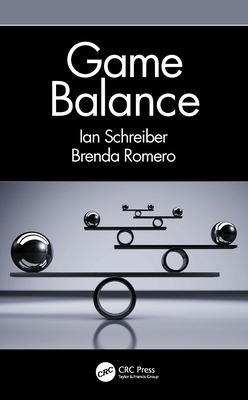 Within the field of game design, game balance can best be described as a black art. It is the process by which game designers make a game simultaneously fair for players while providing them just the right amount of difficulty to be both exciting and challenging without making the game entirely predictable. This involves a combination of mathematics, psychology, and occasionally other fields such as economics and game theory.

Game Balance offers readers a dynamic look into game design and player theory. Throughout the book, relevant topics on the use of spreadsheet programs will be included in each chapter. This book therefore doubles as a useful reference on Microsoft Excel, Google Spreadsheets, and other spreadsheet programs and their uses for game designers.

Ian Schreiber has been in the industry since 2000, first as a programmer and then as a game designer. He has worked on eight published game titles, training/simulation games for three Fortune 500 companies, and has advised countless student projects. He is the co-founder of Global Game Jam, the largest in-person game jam event in the world. Ian has taught game design and development courses at a variety of colleges and universities since 2006.

Brenda Romero is a BAFTA award-winning game director, entrepreneur, artist, and Fulbright award recipient and is presently game director and creator of the Empire of Sin franchise. As a game director, she has worked on 50 games and contributed to many seminal titles, including the Wizardry and Jagged Alliance series and titles in the Ghost Recon, Dungeons & Dragons, and Def Jam franchises.

Brenda Romero is an award-winning game designer, artist and Fulbright scholar who entered the video game industry in 1981. As a designer, she has contributed to many seminal titles, including the Wizardry and Jagged Alliance series and titles in the Ghost Recon and Dungeons & Dragons franchises. Away from the machine, her analog series of six games, The Mechanic is the Message, has drawn national and international acclaim, particularly Train and Síochán Leat (The Irish Game) which is presently housed in the National Museum of Play. In 2015, she won the coveted Ambassador's Award at the Game Developers Choice Awards. In 2014, she received a Fulbright award to study Ireland's game industry, academic and government policies. In 2013, she was named one of the top 10 game developers by Gamasutra.com and Develop magazine listed her among the 25 people who changed games in 2013. Romero co-owns Loot Drop and Romero Games.

Ian Schreiber has been in the industry for eight years, first as a programmer and then as a game designer. He has worked on five published game titles, including Playboy: the Mansion and the Nintendo DS version of Marvel Trading Card Game. He has also developed training/simulation games for two Fortune 500 companies. Ian has taught game design and development courses at Ohio University, Columbus State Community College, and Savannah College of Art and Design, and has mentored college students at those and several other universities. Ian currently teaches at Rochester Institute of Technology.