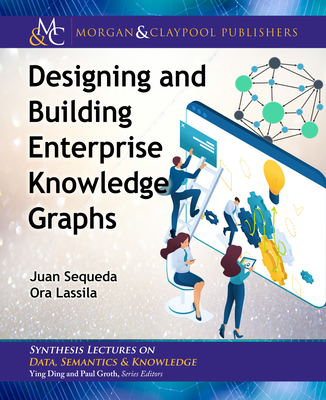 Knowledge graphs are fulfilling the vision of creating intelligent systems that integrate knowledge and data at large scale. Tech giants have adopted knowledge graphs for the foundation of next-generation enterprise data and metadata management, search, recommendation, analytics, intelligent agents, and more. We are now observing an increasing number of enterprises that seek to adopt knowledge graphs to develop a competitive edge.

In order for enterprises to design and build knowledge graphs, they need to understand the critical data stored in relational databases. How can enterprises successfully adopt knowledge graphs to integrate data and knowledge, without boiling the ocean? This book provides the answers.

Juan Sequeda is the Principal Scientist at data.world. He joined through the acquisition of Capsenta, a company he founded as a spin-off from his research. Juan's goal is to reliably create knowledge from inscrutable data. His academic and industry work has been on designing and building knowledge graphs for enterprise data integration where he has researched and developed technologies for semantic and graph data virtualization, ontology and graph data modeling and schema mapping, and data integration methodologies. Juan serves as a bridge between academia and industry through standardization committees, like serving as the co-chair of the Property Graph Schema Working Group and a past member of the Graph Query Languages task force of the Linked Data Benchmark Council (LDBC), as well as a past invited expert member and standards editor at the World Wide Web Consortium (W3C).

Juan holds a Ph.D. in Computer Science from The University of Texas at Austin. He is the recipient of the NSF Graduate Research Fellowship, 2nd place in the 2013 Semantic Web Challenge for his work on ConstituteProject.org, Best Student Research Paper at International Semantic Web Conference 2014, and the 2015 Best Transfer and Innovation Project awarded by the Institute for Applied Informatics.

Ora Lassila is a Principal Graph Technolgist in the Amazon Neptune graph database team. Earlier, he was a Managing Director at State Street, heading efforts to adopt ontologies and graph databases. Before that, he worked as a technology architect at Pegasystems, as an architect and technology strategist at Nokia Location & Commerce (later renamed HERE), and prior to that as a Research Fellow at the Nokia Research Center. He was an elected member of the Advisory Board of the World Wide Web Consortium (W3C) in 1998-2013, and represented Nokia in the W3C Advisory Committee in 1998-2002. In 1996-1997 he was a Visiting Scientist at MIT Laboratory for Computer Science, working with W3C and launching the Resource Description Framework (RDF) standard; he served as a co-editor of the original RDF Model and Syntax specification. Much of his research work at the Nokia Research Center focused on the Semantic Web and particularly its applications to mobile and ubiquitous computing. He collaborated with several U.S. universities, and was an active participant in the DARPA Agent Markup Language (DAML) program.