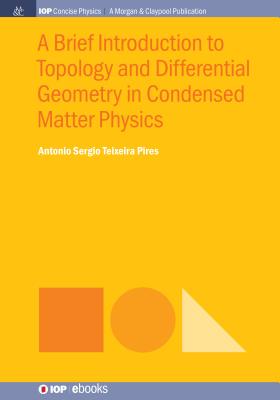 In the last years there have been great advances in the applications of topology and differential geometry to problems in condensed matter physics. Concepts drawn from topology and geometry have become essential to the understanding of several phenomena in the area. Physicists have been creative in producing models for actual physical phenomena which realize mathematically exotic concepts and new phases have been discovered in condensed matter in which topology plays a leading role. An important classification paradigm is the concept of topological order, where the state characterizing a system does not break any symmetry, but it defines a topological phase in the sense that certain fundamental properties change only when the system passes through a quantum phase transition.

The main purpose of this book is to provide a brief, self-contained introduction to some mathematical ideas and methods from differential geometry and topology, and to show a few applications in condensed matter. It conveys to physicists the basis for many mathematical concepts, avoiding the detailed formality of most textbooks.