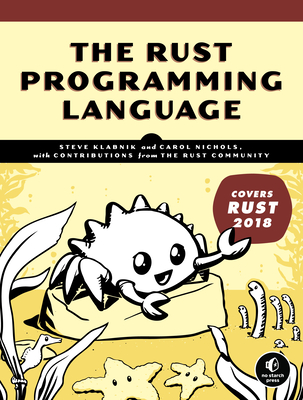 The official book on the Rust programming language, written by the Rust development team at the Mozilla Foundation, fully updated for Rust 2018.

The authors of The Rust Programming Language, members of the Rust Core Team, share their knowledge and experience to show you how to take full advantage of Rust's features--from installation to creating robust and scalable programs. You'll begin with basics like creating functions, choosing data types, and binding variables and then move on to more advanced concepts, such as:

Steve Klabnik is the Community Team Leader for the Rust team at Mozilla, in charge of official Rust community documentation as well as the key Rust community advocate. Klabnik is a frequent speaker at conferences and one of the world's most prolific contributors to Rails projects.

Carol Nichols is a member of the Rust Community Team. She's been active in the Rust community and is an organizer of the Rust Belt Rust Conference.