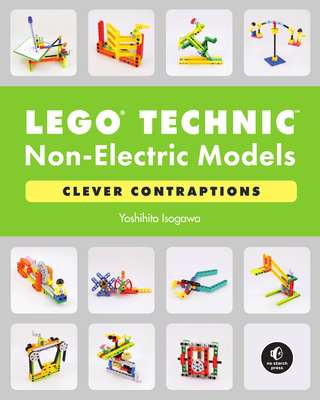 Master builder and LEGO luminary Yoshihito Isogawa helps you build more than 100 creative, non-electric models with LEGO Technic parts. Part of a two-volume set. LEGO Technic Non-Electric Models: Clever Contraptions features 106 motor-free mechanisms for you to build and operate. Each project includes full-color photographs from multiple angles and illustrated Technic parts to help you follow along. The models range from practical tools for lifting, gripping, shooting, and measuring to working gadgets that demonstrate principles of mechanical engineering. The Technic models in Clever Contraptions require no electric elements or sensors. Instead, you'll use cranks, winches, doors, and rotators to operate devices including wind turbines, spinning tops, grabbing tools, and a spirograph. The clever kinetic ideas at play will inspire you to create your own mechanicals marvels. This Technic guide is part of a two-volume set, and the brainchild of master builder Yoshihito Isogawa. Each book is filled with vibrant photos of Isogawa's unique non-electric models, which will fire up the imaginations of LEGO builders of all ages. Imagine. Create. Invent. Now, what will you build?

Yoshihito Isogawa is a LEGO luminary with over fifty years of building experience. In addition to running Isogawa Studio, Inc., he regularly holds LEGO workshops, lectures at schools and science museums, and creates LEGO models for events and exhibitions. He is the author of the popular LEGO Technic Idea Book series, The LEGO Power Functions Idea Books, The LEGO MINDSTORMS EV3 Idea Book, and The LEGO BOOST Idea Book (all No Starch Press), as well as other Japanese-language LEGO titles.