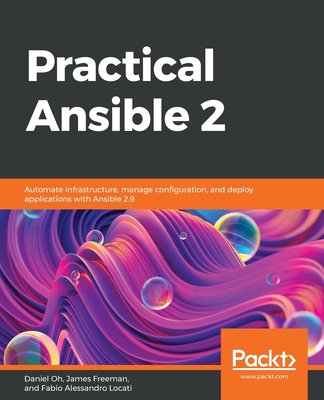 Ansible enables you to automate software provisioning, configuration management, and application roll-outs, and can be used as a deployment and orchestration tool. While Ansible provides simple yet powerful features to automate multi-layer environments using agentless communication, it can also solve other critical IT challenges, such as ensuring continuous integration and continuous deployment (CI/CD) with zero downtime.

In this book, you'll work with Ansible 2.9 and learn to solve complex issues quickly with the help of task-oriented scenarios. You'll start by installing and configuring Ansible on Linux and macOS to automate monotonous and repetitive IT tasks and get to grips with concepts such as playbooks, inventories, and network modules. As you progress, you'll gain insight into the YAML syntax and learn how to port between Ansible versions. In addition to this, you'll also understand how Ansible enables you to orchestrate multi-layer environments such as networks, containers, and the cloud.

By the end of this Ansible book, you'll be well - versed in writing playbooks and other related Ansible code to overcome just about all of your IT challenges, from infrastructure-as-code provisioning to application deployments, and even handling the mundane day-to-day maintenance tasks that take up so much valuable time.

If you are a DevOps engineer, administrator, or any IT professional looking to automate IT tasks using Ansible, this book is for you. Prior knowledge of Ansible is not necessary.

Daniel Oh is a principal technical marketing manager at Red Hat. He provides runtimes, frameworks, fast data access, and high-performance messaging in flexible, easy-to-use, cost-effective, open, and collaborative ways. He's also a CNCF ambassador and DevOps Institute ambassador who evangelizes how to design and develop cloud-native serverless microservices and deploy them to multi/hybrid cloud-native platforms based on CNCF projects. Daniel loves to share his developer experiences with DevOps folks in terms of how to evolve traditional microservices to cloud-native, event-driven, and serverless applications via technical workshops, brown bag sessions, hackathons, and hands-on labs across regions at many international conferences.

James Freeman is an accomplished IT consultant with over 20 years' experience in the technology industry. He has more than 5 years of first-hand experience of solving real-world enterprise problems in production environments using Ansible, frequently introducing Ansible as a new technology to businesses and CTOs for the first time. In addition, he has authored and facilitated bespoke Ansible workshops and training sessions, and has presented at both international conferences and meetups on Ansible.

Fabio Alessandro Locati - commonly known as Fale - is an EMEA senior solution architect at Red Hat, a public speaker, an author, and an open source contributor. His primary areas of expertise are Linux, automation, security, and cloud technologies. Fale has more than 15 years of working experience in IT, with many of them spent consulting for many companies, including dozens of Fortune 500 companies. Fale has written Learning Ansible 2.7, Learning Ansible 2, and OpenStack Cloud Security, and has been part of the review process of multiple books.