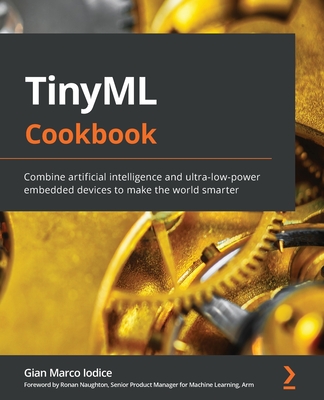 This book explores TinyML, a fast-growing field at the unique intersection of machine learning and embedded systems to make AI ubiquitous with extremely low-powered devices such as microcontrollers.

The TinyML Cookbook starts with a practical introduction to this multidisciplinary field to get you up to speed with some of the fundamentals for deploying intelligent applications on Arduino Nano 33 BLE Sense and Raspberry Pi Pico. As you progress, you'll tackle various problems that you may encounter while prototyping microcontrollers, such as controlling the LED state with GPIO and a push-button, supplying power to microcontrollers with batteries, and more. Next, you'll cover recipes relating to temperature, humidity, and the three “V” sensors (Voice, Vision, and Vibration) to gain the necessary skills to implement end-to-end smart applications in different scenarios. Later, you'll learn best practices for building tiny models for memory-constrained microcontrollers. Finally, you'll explore two of the most recent technologies, microTVM and microNPU that will help you step up your TinyML game.

By the end of this book, you'll be well-versed with best practices and machine learning frameworks to develop ML apps easily on microcontrollers and have a clear understanding of the key aspects to consider during the development phase.