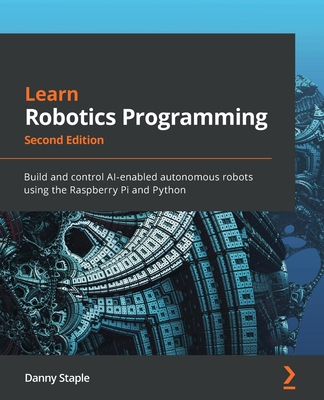 We live in an age where the most complex or repetitive tasks are automated. Smart robots have the potential to revolutionize how we perform all kinds of tasks with high accuracy and efficiency. With this second edition of Learn Robotics Programming, you'll see how a combination of the Raspberry Pi and Python can be a great starting point for robot programming.

The book starts by introducing you to the basic structure of a robot and shows you how to design, build, and program it. As you make your way through the book, you'll add different outputs and sensors, learn robot building skills, and write code to add autonomous behavior using sensors and a camera. You'll also be able to upgrade your robot with Wi-Fi connectivity to control it using a smartphone. Finally, you'll understand how you can apply the skills that you've learned to visualize, lay out, build, and code your future robot building projects.

By the end of this book, you'll have built an interesting robot that can perform basic artificial intelligence operations and be well versed in programming robots and creating complex robotics projects using what you've learned.

This second edition of Learn Robotics Programming is for programmers, developers, and robotics enthusiasts who want to develop a fully functional robot and leverage AI to build interactive robots. Basic knowledge of the Python programming language will help you understand the concepts covered in this robot programming book more effectively.

Danny Staple builds robots and gadgets as a hobbyist, makes videos about his work with robots, and attends community events such as PiWars and Arduino Day. He has been a professional Python programmer, later moving into DevOps, since 2009, and a software engineer since 2000. He has worked with embedded systems, including embedded Linux systems, throughout the majority of his career. He has been a mentor at a local CoderDojo, where he taught how to code with Python. He has run Lego Robotics clubs with Mindstorms. He has also developed Bounce!, a visual programming language targeted at teaching code using the NodeMCU IoT platform. The robots he has built with his children include TankBot, SkittleBot (now the Pi Wars robot), ArmBot, and SpiderBot.