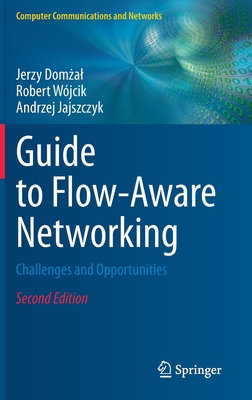 The book presents a comprehensive view on Flow-Aware Networking. It starts with a brief overview of the known QoS architectures based on the concept of a flow. Then, the original FAN concept is presented, along with its variations proposed by the authors. The next chapter covers a very valuable feature of the FAN architecture, namely its ability to assure net neutrality. The chapters that follow will discuss, in detail, a variety of issues making the FAN concept implementable, including congestion control, fairness, resilience to failures, service differentiation and degradation. The final chapter presents the test implementation of the FAN router, including the environment used and performance tests. Chapters are supplemented with problems to solve, along with their solutions. The pedagogical character of the book is supported by a number of illustrative examples contained in most of the chapters. At the end of the book, a glossary of the key terms is included, along with a comprehensive bibliography.

Flow-based traffic management is currently becoming a mainstream. There is plenty of Quality of Service (QoS) techniques based on flows. Software-Defined Networking with its dominant protocol OpenFlow also follows this trend. Flow-Aware Networking (FAN) is a promising QoS architecture. Information on FAN can be found in various research papers. It is, therefore highly scattered. This book gathers practically all relevant information regarding FAN and puts it together.

Quality of Service assurance is one of the key challenges of today's Internet. The existing approaches to provide QoS do not meet expectations of network operators, managers and users although numerous efforts in this area have been reported. One of the most promising concepts is the Flow-Aware Network (FAN). FAN can play a key role in assuring the net neutrality, smoothly combining interests of all the involved parties. The authors of the proposal have been involved in FAN research practically since its inception at the start of the 21st century. The book reports the wide experiences the authors accumulated in the subject area during the work on common FAN-related projects conducted with the team of James Roberts that proposed the original FAN concept as well as other leading research groups in Europe and the USA. One of the aims of the book is to accompany courses taught by the authors.

Jerzy Domżal received the M.S., Ph.D. and D.Sc. degrees in Telecommunications from AGH University of Science and Technology, Kraków, Poland in 2003, 2009, and 2016 respectively. Now, he is an Associate Professor at Department of Telecommunications at AGH University of Science and Technology. He is especially interested in optical networks and services for Future Internet. He worked on network congestion control and traffic engineering issues in the following European Projects: Nobel/Nobel II, SmoothIT, EuroNF, e-Photon/ONe(+), BONE. Now, he is involved in a few research projects, e.g., related to flow-based services for Future Internet. He has served as TPC member for IEEE GLOBECOM (2010-2016), IEEE ICC (2010-2016). He was a Local Organizing Commitee Chair of the ITC'2012 conference. In 2010 and in 2013, he received scholarships for distinguished young researchers from Minister of Science and Higher Education in Poland. In 2015, he received a science award from POLITYKA magazine. He is also the co-author of over 100 technical papers, two patents, and three books. Internships: Spain, Barcelona, Universitat Politecnica de Catalunya, April 2005; Spain, Madrid, Universidad Autonoma de Madrid, March 2009, Stanford University, USA, May-June 2012.
Robert Wójcik received M.Sc. and Ph.D. (with honors) degrees in telecommunications from AGH University of Science and Technology, Krakow, Poland in 2006 and 2011, respectively. The Ph.D. thesis was titled: "Net Neutral Quality of Service Differentiation in Flow-Aware Networks". He works as a Professor at the Department of Telecommunications of AGH. He is the co-author of 20 JCR journal papers, 5 patent applications and a number of conference papers. He has been involved in several international scientific projects, including: SmoothIT, NoE BONE and Euro-NF. His current research interests focus on Software-Defined Networking, Quality of Service, and multipath routing. He is a technical editor of IEEE Communications Magazine. He is also a TPC member of several telecommunications conferences.
Andrzej Jajszczyk is Professor at the Department of Telecommunications, the AGH University of Science and Technology in Krakow, Poland. He received Ph.D. from Poznan University of Technology. He was a visiting scientist at the University of Adelaide in Australia, Queen's University in Kingston, Ontario, Canada, and Ecole Nationale Supérieure des Télécommunications de Bretagne, France. He is the author or co-author of 12 books and over 300 research papers, as well as 19 patents in the area of computer and telecommunications networking. He also published over 80 papers on research funding and higher education. He has been a consultant to industry, telecommunications operators, and government agencies in Australia, Canada, China, France, Germany, India, Poland, and the USA. He is an IEEE Fellow, a member of Polish Academy of Sciences, and Academia Europaea. He held important positions in IEEE Communications Society, such as: Director of Magazines, Director of the Europe, Middle East and Africa region, and Vice President. He served as the founding Director of the National Science Centre, a Polish research funding agency. He is a member of the Scientific Council of the ERC.