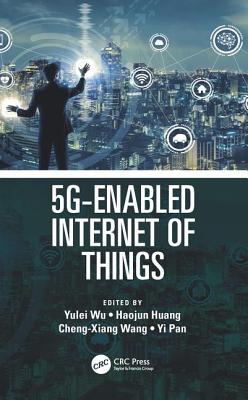 How the enabling technologies in 5G as an integral or as a part can seamlessly fuel the IoT revolution is still very challenging. This book presents the state-of-the-art solutions to the theoretical and practical challenges stemming from the integration of 5G enabling technologies into IoTs in support of a smart 5G-enabled IoT paradigm, in terms of network design, operation, management, optimization, and applications. In particular, the technical focus covers a comprehensive understanding of 5G-enabled IoT architectures, converged access networks, smart network management, and emerging applications of 5G-eabled IoT.

Dr. Yulei Wu is a Lecturer in Computer Science at the University of Exeter. He received his Ph.D. degree in Computing and Mathematics and B.Sc. (First Class Hons) degree in Computer Science from the University of Bradford, UK, in 2010 and 2006, respectively. His main research focuses on Future Internet Architecture and Technologies, Smart/Active Network and Management, Green Networking, Big Data for Networking, and Analytical Modelling and Performance Optimisation.Before joining the University of Exeter, he was working as an Associate Professor in the Chinese Academy of Sciences (CAS). During his stay in CAS, he mainly worked in the field of Internet Architecture and Technologies. He was the Principal Investigator of a National Natural Science Foundation of China (NFSC) project on Intelligent Content Request and Dissemination Technologies, and he was the Co-Investigator of a National High-tech R&D ("863") project on Virtual Router, a National Key Technologies R&D project on IPv6, and a CAS Strategic Priority Research project on Future Internet Research and Testbed. He was elected as a Member of Youth Innovation Promotion Association CAS.

Dr. Wu serves as an Associate Editor or a Member of Editorial Board for several international journals including Computer Networks (Elsevier) and Journal of Internet Technology, as well as a Lead Guest Editor for many international journals, e.g., IEEE Transactions on Sustainable Computing, IEEE Access, Computer Networks, Future Generation Computer Systems, Multimedia Tools and Applications, Wireless Personal Communications, Security and Communication Networks, EURASIP Journal on Wireless Communications and Networking, and Journal of Internet Technology. He recently edited a book entitled Big Data and Computational Intelligence in Networking. Dr. Wu has been the Chair or Vice-Chair of 40 international conferences/workshops, and he has served as the Program Committee Member of more than 90 professional conferences/workshops. He was awarded the Outstanding Leadership Awards from IEEE CIT-2017, IEEE ISPA-2013, and IEEE TrustCom-2012, and the Outstanding Service Awards from IEEE HPCC-2012, IEEE CIT-2010, IEEE ScalCom-2010. He is a Member of IEEE, ACM and LMS, and a Fellow of HEA.