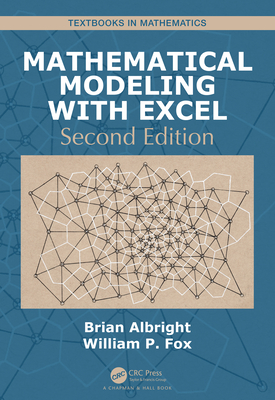 Mathematical Modeling with Excel, Second Edition, presents a wide variety of common types of models found in other mathematical modeling texts, as well as some new types. However, the models are presented in a very unique format. A typical section begins with a general description of the scenario being modeled. The model is then built using the appropriate mathematical tools. Then it is implemented and analyzed in Excel via step-by-step instructions. In the exercises, we ask students to modify or refine the existing model, analyze it further, or adapt it to similar scenarios.

Brian Albright received undergraduate degrees in mathematics and secondary education from Emporia State University, Emporia, KS; and received a D.Sc. in systems science and mathematics from Washington University in St. Louis. In early 2004 he worked as a civilian transportation analyst at the United States Transportation Command. Since 2004 he has taught all levels of undergraduate mathematics at Concordia University, Seward, NE. He has published two textbooks, Mathematical Modeling with Excel and Essentials of Mathematical Statistics.

Dr. William P. Fox is an emeritus professor in the Department of Defense Analysis at the Naval Postgraduate School. Currently, he is an adjunct professor, Department of Mathematics, the College of William and Mary. He received his Ph.D. at Clemson University and has many publications and scholarly activities including twenty books and over one hundred and fifty journal articles.