SQL Cookbook: Query Solutions and Techniques for All SQL Users 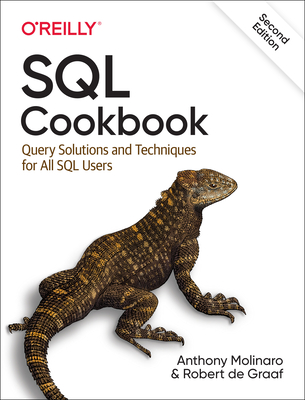 You may know SQL basics, but are you taking advantage of its expressive power? The new edition of this cookbook applies a highly practical approach to Structured Query Language (SQL) so you can create and manipulate large stores of data. Based on real-world examples, this updated book provides a framework to help you construct solutions and executable examples in several flavors of SQL--including Oracle, DB2, SQL Server, MySQL, and PostgreSQL.

Anthony Molinaro is a data scientist at Johnson & Johnson. In his current role he is a manager in the Observational Health Data Analytics group within Janssen R&D. His primary areas of research are nonparametric methods, time series analysis, and large scale database characterization and transformation. He is a member of the open science OHDSI community. Anthony holds a BA in Mathematics and an MA in Applied Mathematics & Statistics from CUNY Hunter College. He resides in NY with his wife, Georgia, and his two daughters, Kiki and Connie.

Robert de Graaf graduated as an Engineer, and worked in the Manufacturing industry after completing studies. While working as an Engineer, Robert discovered the power of statistics for solving real world problems, and completed a Master's in Statistics in time to benefit from the Data Science boom. He has worked for RightShip as their Senior Data Scientist since 2013, and is the author of Managing Your Data Science Projects.