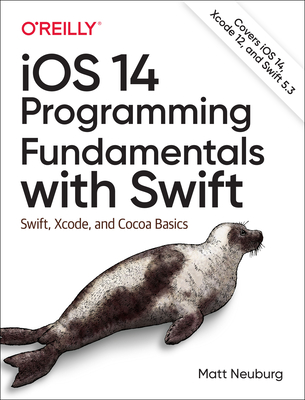 Move into iOS development by getting a firm grasp of its fundamentals, including the Xcode 12 IDE, Cocoa Touch, and the latest version of Apple's acclaimed programming language, Swift 5.3. With this thoroughly updated guide, you'll learn the Swift language, understand Apple's Xcode development tools, and discover the Cocoa framework.

In this edition, catch up on the latest iOS programming features:

Once you master the fundamentals, you'll be ready to tackle the details of iOS app development with author Matt Neuburg's companion guide, Programming iOS 14.

Matt Neuburg has a PhD in Classics and has taught at many universities and colleges. He has been programming computers since 1968. He has written applications for Mac OS X and iOS, is a former editor of MacTech Magazine, and is a long-standing contributing editor for TidBITS. His previous O'Reilly books are Frontier: The Definitive Guide, REALbasic: The Definitive Guide, and AppleScript: The Definitive Guide. He makes a living writing books, articles, and software documentation, as well as by programming, consulting, and training.