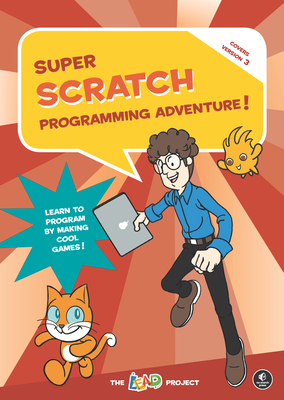 This is the book that created the Scratch book market in 2012. Colorful, comic-book style guide to making fun games with the block-based, wildly popular Scratch visual programming language. Now updated to cover Scratch 3 Scratch is the wildly popular -educational programming language used by -tens of millions of first-time learners in classrooms and homes worldwide. By dragging -together and assembling colorful blocks of code, kids can learn computer programming concepts as they make cool games and animations. Scratch 3 has an updated user interface featuring new sprites, a new sound editor, and many new programming blocks. It also includes extensions that enable you to program physical devices (such as micro: bit and LEGO robotics kits) and to translate text within your Scratch projects. Super Scratch Programming Adventure was created together with Mitch Resnick, the creator of Scratch (that's him on the cover). The book has readers create projects inspired by classic arcade games that can be programmed (and played ) in an afternoon. Patient, step-by-step explanations of the code and fun programming challenges will have kids creating their own games in no time. In addition to specific programming instructions, the book includes comics that draw young learners into the book. Readers learn to code as they work through the comics which make programming concepts like variables, flow control, and subroutines effortless to absorb. Packed with ideas for games that kids will be proud to show off, Super Scratch Programming Adventure is the perfect first step for the budding programmer.

The Learning through Engineering, Art, and Design (LEAD) Project is an educational initiative established to encourage the development of creative thinking through the use of technology. Created by The Hong Kong Federation of Youth Groups in collaboration with the MIT Media Lab, the LEAD project promotes hands-on, design-based activities to foster innovation, problem solving skills, and technical literacy.