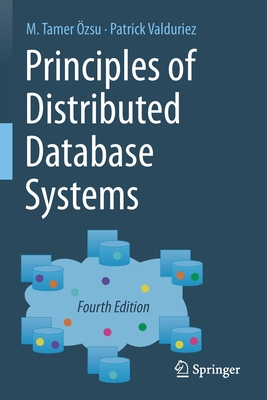 The fourth edition of this classic textbook provides major updates. This edition has completely new chapters on Big Data Platforms (distributed storage systems, MapReduce, Spark, data stream processing, graph analytics) and on NoSQL, NewSQL and polystore systems. It also includes an updated web data management chapter that includes RDF and semantic web discussion, an integrated database integration chapter focusing both on schema integration and querying over these systems. The peer-to-peer computing chapter has been updated with a discussion of blockchains. The chapters that describe classical distributed and parallel database technology have all been updated.
The new edition covers the breadth and depth of the field from a modern viewpoint. Graduate students, as well as senior undergraduate students studying computer science and other related fields will use this book as a primary textbook. Researchers working in computer science will also find this textbook useful.
This textbook has a companion web site that includes background information on relational database fundamentals, query processing, transaction management, and computer networks for those who might need this background. The web site also includes all the figures and presentation slides as well as solutions to exercises (restricted to instructors).

M. Tamer Özsu is a University Professor at Cheriton School of Computer Science at University of Waterloo, Canada. He has been conducting research in distributed data management for thirty years. He is a Fellow of the Royal Society of Canada, American Association for the Advancement of Science (AAAS), Association for Computing Machinery (ACM) and Institute of Electrical and Electronics Engineers (IEEE). He is an elected member of the Science Academy, Turkey, and a member of Sigma Xi. He has received the CS-Can/Info-Can (Canadian Computer Science Society) Lifetime Achievement Award in 2019, ACM SIGMOD Test-of-Time Award in 2015, ACM SIGMOD Contributions Award in 2008 and the Ohio State University College of Engineering Distinguished Alumnus Award in 2008 and has two best paper awards and one honourable mention for his publications. He serves on the editorial boards of many journals and book series, and is also the co-editor-in-chief, with Ling Liu, of the Encyclopedia of Database Systems.
Patrick Valduriez is a senior scientist at Inria, France. He has also been a professor of computer science at University Pierre et Marie Curie (UPMC) in Paris (2000-2002) and a researcher at Microelectronics and Computer Technology Corp. in Austin, Texas (1985-1989). Since 2019, he is the scientific advisor of the LeanXcale startup.He is currently the head of the Zenith team (between Inria and University of Montpellier, LIRMM) that focuses on data science, in particular data management in large-scale distributed and parallel systems and scientific data management. He currently serves as associate editor of several journals, including the VLDB Journal, Distributed and Parallel Databases, and Internet and Databases. He has served as PC chair of major conferences such as SIGMOD and VLDB. He was the general chair of SIGMOD 2004, EDBT 2008 and VLDB 2009 Conferences. He obtained several best paper awards, including at VLDB 2000. He was the recipient of the 1993 IBM scientific prize in Computer Science in France and the 2014 Innovation Award from Inria - French Academy of Science - Dassault Systems. He is an ACM Fellow.