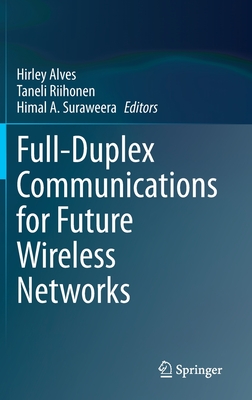 This book focuses on the multidisciplinary state-of-the-art of full-duplex wireless communications and applications. Moreover, this book contributes with an overview of the fundamentals of full-duplex communications, and introduces the most recent advances in self-interference cancellation from antenna design to digital domain. Moreover, the reader will discover analytical and empirical models to deal with residual self-interference and to assess its effects in various scenarios and applications. Therefore, this is a highly informative and carefully presented book by the leading scientists in the area, providing a comprehensive overview of full-duplex technology from the perspective of various researchers, and research groups worldwide. This book is designed for researchers and professionals working in wireless communications and engineers willing to understand the challenges and solutions full-duplex communication so to implement a full-duplex system.

Assist. Prof. Hirley Alves received the B.Sc. and M.Sc. degrees from the Federal University of Technology-Paraná (UTFPR), Brazil, in 2010 and 2011, respectively, both in electrical engineering, and the dual D.Sc. degree from the University of Oulu and UTFPR, in 2015. In 2017, he was an Adjunct Professor in machine-type wireless communications with the Centre for Wireless Communications (CWC), University of Oulu, Oulu, Finland. In 2019, he joined CWC as an Assistant Professor and is currently the Head of the Machine-type Wireless Communications Group. He is actively working on massive connectivity and ultra-reliable low latency communications for future wireless networks, 5GB and 6G, full-duplex communications, and physical-layer security. He leads the URLLC activities for the 6G Flagship Program. He is a co-recipient of the 2017 IEEE International Symposium on Wireless Communications and Systems (ISWCS) Best Student Paper Award, and 2019 IEEE European Conference on Networks and Communications (EuCNC) Best Student Paper Award and a co-recipient of the 2016 Research Award from the Cuban Academy of Sciences. He has been the organizer, chair, and TPC and tutorial lecturer for several renowned international conferences. He is the General Chair of the ISWCS'2019 and the General Co-Chair of the 1st 6G Summit, Levi 2019, and ISWCS 2020.

Assist. Prof. Taneli Riihonen received the D.Sc. (tech.) degree in electrical engineering (with distinction) from Aalto University, Helsinki, Finland in August 2014, and his doctoral thesis was nominated as the best engineering dissertation of the year in Finland. Since August 2017, Dr. Riihonen is an Assistant Professor (tenure track) at Tampere University, Finland. He has been serving as an Editor of IEEE Communications Letters and IEEE Wireless Communications Letters. His research activity is focused on physical-layer multi-carrier, multi-antenna, multi-relay and full-duplex wireless techniques with current interest in the evolution of beyond 5G radio systems.