Discrete Structures and Their Interactions 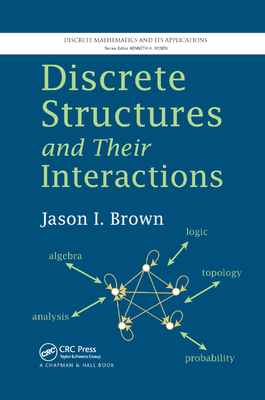 Discover the Connections between Different Structures and Fields

Discrete Structures and Their Interactions highlights the connections among various discrete structures, including graphs, directed graphs, hypergraphs, partial orders, finite topologies, and simplicial complexes. It also explores their relationships to classical areas of mathematics, such as linear and multilinear algebra, analysis, probability, logic, and topology.

The text introduces a number of discrete structures, such as hypergraphs, finite topologies, preorders, simplicial complexes, and order ideals of monomials, that most graduate students in combinatorics, and even some researchers in the field, seldom experience. The author explains how these structures have important applications in many areas inside and outside of combinatorics. He also discusses how to recognize valuable research connections through the structures.

Jason I. Brown is a professor of mathematics at Dalhousie University. He received a Ph.D. from the University of Toronto and has written over 70 refereed articles. His research interests include graphs, hypergraphs, partial order, finite topologies, and simplicial complexes, with a focus on the applications of other fields of mathematics to discrete problems. His mathematical research that uncovered how the Beatles played the opening chord of "A Hard Day's Night" was featured in various media, including NPR and BBC radio, Guitar Player Magazine, and the Wall Street Journal website.