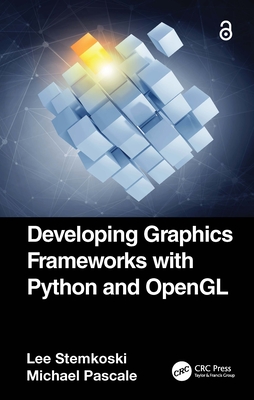 Developing Graphics Frameworks with Python and OpenGL shows you how to create software for rendering complete three-dimensional scenes. The authors explain the foundational theoretical concepts as well as the practical programming techniques that will enable you to create your own animated and interactive computer-generated worlds.

You will learn how to combine the power of OpenGL, the most widely adopted cross-platform API for GPU programming, with the accessibility and versatility of the Python programming language. Topics you will explore include generating geometric shapes, transforming objects with matrices, applying image-based textures to surfaces, and lighting your scene. Advanced sections explain how to implement procedurally generated textures, postprocessing effects, and shadow mapping. In addition to the sophisticated graphics framework you will develop throughout this book, with the foundational knowledge you will gain, you will be able to adapt and extend the framework to achieve even more spectacular graphical results.

Lee Stemkoski is a professor of mathematics and computer science. He earned his Ph.D. in mathematics from Dartmouth College in 2006 and has been teaching at the college level since. His specialties are computer graphics, video game development, and virtual and augmented reality programming.

Michael Pascale is a software engineer interested in the foundations of computer science, programming languages, and emerging technologies. He earned his B.S. in Computer Science from Adelphi University in 2019. He strongly supports open source software and open access educational resources.