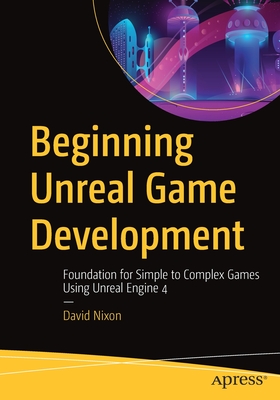 Get started creating video games using Unreal Engine 4 (UE4) and learning the fundamentals of game development. Through hands-on, step-by-step tutorials, you will learn to design engaging environments and a build solid foundation for more complex games. Discover how to utilize the 3D game design software behind the development of immensely popular games for PC, console, and mobile.

Beginning Unreal Game Development steers you through the fundamentals of game development with UE4 to design environments that both engage the player and are aesthetically pleasing. Author David Nixon shows you how to script logic, define behaviors, store data, and create characters. You will learn to create user interfaces, such as menus, load screens, and head-up displays (HUDs), and manipulate audio to add music, sound effects, and dialogue to your game. The book covers level editors, actor types, blueprints, character creation and control, and much more. Throughout the book, you'll put theory into practice and create an actual game using a series of step-by-step tutorials.

With a clear, step-by-step approach, Beginning Unreal Game Development builds up your knowledge of Unreal Engine 4 so you can start creating and deploying your own 3D video games in no time.

This book is for beginners with no prior game design or programming experience. It is also intended for video game enthusiasts who are brand-new to the world of game development and want to learn how to design a game from scratch using UE4.

David Nixon is a professional software developer with a degree in computer science from Florida Atlantic University. He is a lifelong video game aficionado who started with the Atari 2600 and never looked back. He enjoys music, reading, and sports in his spare time.