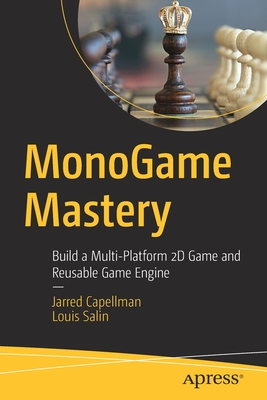 Master the art of game creation with MonoGame--the cross-platform framework of choice for independent developers. Learn the various aspects needed to create your next game by covering MonoGame framework specifics, engine creation, graphics, patterns, and more.

The MonoGame framework provides an incredible canvas for the programmer to create their next 2D game, and this book teaches you to make the most of it. You will start from the ground up, beginning with the basics of what MonoGame is, the pipeline, and then how to build a reusable game engine on top of the framework. You will deep dive into various components of each aspect of a game, including graphics, input, audio, and artificial intelligence. The importance of game tooling is also covered. By the end, you will have a mastery level of understanding of how to create a 2D game using MonoGame.

With a fully functional 2D game, aspiring developers will have the ideal blueprint to tackle their next fully featured game. The material covered is applicable for almost any 2D game project ranging from side scrolling adventures to fighting games.

Beginner to advanced MonoGame programmer would find this book helpful. The audience is expected to have a working knowledge of C#.

Jarred Capellman has been professionally developing software for over 13 years and is a Director of Engineering at SparkCognition in Austin, Texas. He started making QBasic text-based games when he was nine years old. He learned C++ a few years later before studying OpenGL with the eventual goal of entering the gaming industry. Though his goal of professionally developing games didn't come to fruition, he continued deep diving into frameworks such as MonoGame, Vulkan, and DirectX as an important part of his free time. When not programming, he enjoys writing music and is working on his DSc in Cybersecurity, focusing on applying Machine Learning to security threats.

Louis Salin has been a developer for more than 15 years in a wide variety of fields, developing on Windows in the early days in C, C++, and eventually C# before working as a developer on Linux-based web applications using different scripting languages, such as Ruby or Python. His early love for coding comes from all the time he spent as a kid copying video games written in Basic from books borrowed from the library. He wrote his first game in high school and took many classes in computer graphics.