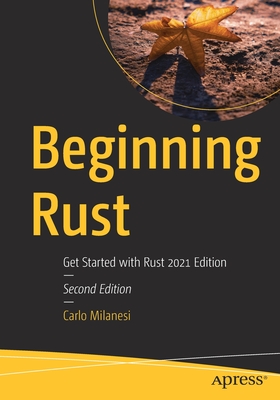 Learn to program with Rust 2021 Edition, in an easy, step-by-step manner on Unix, the Linux shell, macOS, and the Windows command line.  As you read this book, you’ll build on the knowledge you gained in previous chapters and see what Rust has to offer.

Beginning Rust starts with the basics of Rust, including how to name objects, control execution flow, and handle primitive types. You’ll see how to do arithmetic, allocate memory, use iterators, and handle input/output. Once you have mastered these core skills, you’ll work on handling errors and using the object-oriented features of Rust to build robust Rust applications in no time.

Only a basic knowledge of programming in C or C++ and familiarity with a command console are required. After reading this book, you’ll be ready to build simple Rust applications.

Use traits and learn about lifetimes

Those who are new to Rust and who have at least some prior experience with programming in general: some C/C++ is recommended particularly.

Carlo Milanesi is a professional software developer and expert who uses Rust. He has contributed to the Rust development community, and also has done web application development in Linux with PHP, JavaScript, Java, and the Ionic and Vaadin frameworks. Lastly, he has been in involved in these other technologies: GUI design, 2D and 3D rendering, testing automation, and database access. Carlo's applications include CAM/CAM for the stone machining industry, lens cutting laboratory automation, and corporate-wide web applications.