Practical Artificial Intelligence with Swift: From Fundamental Theory to Development of Ai-Driven Apps 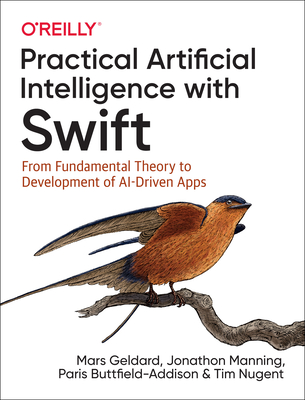 Create and implement artificial intelligence-based features using the Swift programming language. With this practical book, programmers, developers, and those with knowledge of C, C++ will find a one-stop shop for AI and machine learning with Swift.

In the book's first two parts, you'll learn the fundamental theory of AI--essential for any developer working in this space--and discover how to use Swift in the practical application of that theory. In the third and final part, you'll explore the application of Swift-based AI and ML techniques in the construction of iOS applications, including where and how AI-driven features make sense.

Swift programmers will learn how to use open source tools such as Apple's Turi Create and Google's TensorFlow for Swift to train and build models for use in Swift applications.

Marina Rose Geldard, more commonly known as Mars, is a Computer Scientist from Down Under in Tasmania. Entering the world of technology relatively late as a mature-aged student, she has found her place in the world: an industry where she can apply her lifelong love of mathematics and optimisation.

A compulsive volunteer at industry events, Mars also teaches artificial intelligence to first-year ICT students, hikes around in the Tasmanian wilderness, dabbles in research, and builds Game of Thrones in Minecraft.

Mars has been awarded the MJ Rees Prize (for excellence in Information Systems academia) at the University of Tasmania, and is an Apple WWDC Scholarship recipient for 2018. Mars is on the organising committee for Australia's longest running Apple developer event, the /dev/world conference (which is now in its 11th year), and serves on the board for her state's branch of the Australian Computer Society (ACS).

Jon is co-founder and technical lead at Secret Lab, a decade-old game development studio based in Tasmania, Australia. He holds a Bachelor of Computing with First Class Honours and earned a PhD in Computer Science/HCI for his exploration how people manipulate content ranking algorithms in social media.

Jon formerly worked as a Software Engineering at Meebo, a groundbreaking Silicon Valley 'Web 2.0' startup that was acquired by Google, and has co-authored more than 20 technical books for iconic publishers, such as O'Reilly Media and Wiley's For Dummies, on a variety of topics such as game design, mobile development, and rocket science.

Jon and his Secret Lab co-founder, Paris, were jointly awarded the 2010 Pearcey Award for innovative achievements within the ICT industry. Jon sits on the board of the Australasian Apple University Consortium, and is on the organising committee of Australia's longest running Apple developer event, the /dev/world conference (which is now in its 11th year).Jon lives in Hobart, Tasmania, Australia, and can be found on Twitter (@desplesda)

Paris Buttfield-Addison is a producer and co-founder at Secret Lab, a mobile development studio based in beautiful Hobart, Australia. Secret Lab builds games for mobile devices, and primarily for children, such as the AIMIA winning (2014) ABC Play School apps for iPad.

Paris formerly worked with Meebo (which was acquired by Google) as mobile product manager. He has a BA in History, and a PhD in Computing/HCI, and has written nearly a dozen technical, game design, and mobile development books, mostly for O'Reilly Media.

Paris can be found on Twitter @parisba. He still thinks digital watches are a pretty neat idea.

Tim Nugent pretends to be a mobile app developer, game designer, PhD student, and now he even pretends to be an author. When he isn't busy avoiding being found out as a fraud, he spends most of his time designing and creating little apps and games he won't let anyone see. Tim spent a disproportionately long time writing this tiny little bio, most of which was spent trying to stick a witty sci-fi reference in, before he simply gave up. Tim can be found as @The_McJones on Twitter.