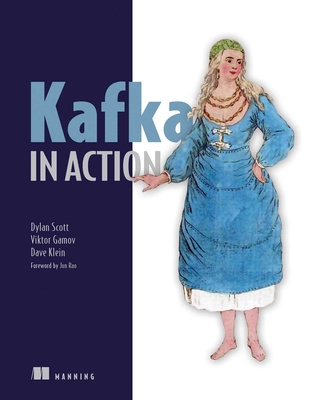 In Kafka in Action you will learn:

Kafka in Action is a fast-paced introduction to every aspect of working with Apache Kafka. Starting with an overview of Kafka's core concepts, you'll immediately learn how to set up and execute basic data movement tasks and how to produce and consume streams of events. Advancing quickly, you’ll soon be ready to use Kafka in your day-to-day workflow, and start digging into even more advanced Kafka topics.

Purchase of the print book includes a free eBook in PDF, Kindle, and ePub formats from Manning Publications.

About the technology
Think of Apache Kafka as a high performance software bus that facilitates event streaming, logging, analytics, and other data pipeline tasks. With Kafka, you can easily build features like operational data monitoring and large-scale event processing into both large and small-scale applications.

About the book
Kafka in Action introduces the core features of Kafka, along with relevant examples of how to use it in real applications. In it, you’ll explore the most common use cases such as logging and managing streaming data. When you’re done, you’ll be ready to handle both basic developer- and admin-based tasks in a Kafka-focused team.

About the reader
For intermediate Java developers or data engineers. No prior knowledge of Kafka required.

Dylan Scott is a software developer with over ten years of experience in Java and Perl. His experience includes implementing Kafka as a messaging system for a large data migration, and he uses Kafka in his work in the insurance industry.

Viktor Gamov is a developer advocate at Confluent.

Dave Klein is a developer advocate at Confluent, with over 28 years of experience in the technology industry.