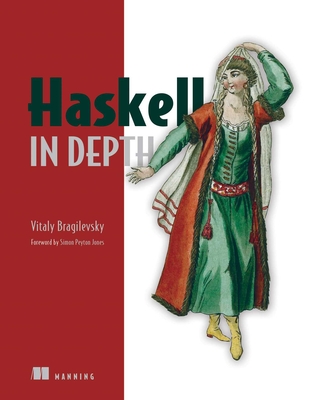 Turn the corner from "Haskell student" to "Haskell developer." Haskell in Depth explores the important language features and programming skills you'll need to build production-quality software using Haskell. And along the way, you'll pick up some interesting insights into why Haskell looks and works the way it does. Get ready to go deep

Haskell in Depth is the perfect second book on Haskell. After a quick refresher on Haskell basics, this hands-on guide dives into examples and application scenarios designed to teach how Haskell works and how to apply it correctly. You'll learn about managing projects with Cabal and Stack, tackle error-handling and testing, and package programs and libraries for production deployment.

Purchase of the print book includes a free eBook in PDF, Kindle, and ePub formats from Manning Publications.

Since 2008, Vitaly Bragilevsky has been teaching Haskell and functional programming to undergraduate students at the Southern Federal University located in Rostov-on-Don, Russia. He is a member of the Haskell 2020 Committee, and has worked on the source code of the Glasgow Haskell Compiler (GHC) and the Idris compiler, both of which are implemented in Haskell.