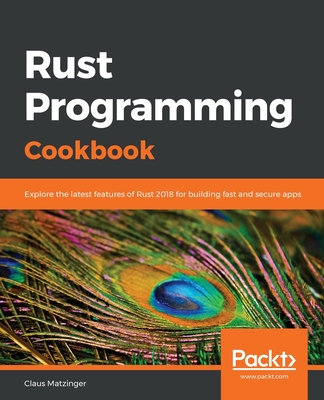 This Rust book covers recipes for configuring Rust for different environments and architectural designs, and provides solutions to practical problems. It will also take you through Rust's core concepts, enabling you to create efficient, high-performance applications that use features such as zero-cost abstractions and improved memory management. As you progress, you'll delve into more advanced topics, including channels and actors, for building scalable, production-grade applications, and even get to grips with error handling, macros, and modularization to write maintainable code. You will then learn how to overcome common roadblocks when using Rust for systems programming, IoT, web development, and network programming. Finally, you'll discover what Rust 2018 has to offer for embedded programmers.

By the end of the book, you'll have learned how to build fast and safe applications and services using Rust.

The Rust cookbook is for software developers looking to enhance their knowledge of Rust and leverage its features using modern programming practices. Familiarity with Rust language is expected to get the most out of this book.

Claus Matzinger is a software engineer with a very diverse background. After working in a small company maintaining code for embedded devices, he joined a large corporation to work on legacy Smalltalk applications. This led to a great interest in programming languages early on, and Claus became the CTO for a health games start-up based on Scala technology. Since then, Claus' roles have shifted toward customer-facing roles in the IoT database technology start-up, Crate IO (creators of CrateDB), and, most recently, Microsoft. There, he hosts a podcast, writes code together with customers, and blogs about the solutions arising from these engagements. For more than 5 years, Claus has been implementing software to help customers innovate, achieve, and maintain success.