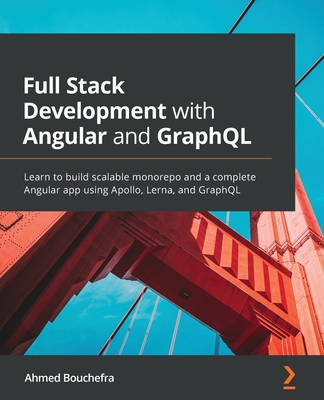 Angular is one of the most popular JavaScript frameworks in modern web app development allowing developers to not only build apps and reuse the code but also develop apps for any deployment target. For web, mobile web, native mobile, and native desktop, GraphQL is the modern and REST alternative for querying web APIs. Using Angular, TypeScript and GraphQL will give you a future-proof and scalable stack you can start building apps around.

This book shows you how to build apps using cutting-edge technologies. You'll learn how to solve common web development problems with GraphQL and Apollo, such as database access, authentication, and image uploads.

The book starts by introducing you to building full stack apps with Angular and GraphQL. Next, you'll learn how to create a monorepo project with Lerna and NPM Workspaces and configure a Node.js app to use GraphQL with Express and Apollo Server. You'll also understand the basics of Angular architecture and routing. Later, the book demonstrates how to build a professionally-looking UI with Angular Material, use Apollo Client to interface with the server to get data from the built GraphQL API.

You'll learn about Apollo Client's type and field policies, and various fetching policies. In addition to this, you'll learn about local state management and reactive variables with Apollo Client and how to generate TypeScript types and even Angular Apollo services for your GraphQL schema and queries using GraphQL Code Generator to implement a scalable codebase.

By the end of this book, you'll have the skills you need to be able to build your own full stack application.

This Angular GraphQL book is for Angular developers who want to learn how to use GraphQL and Apollo with Angular to build full-stack applications. This book does not assume prior knowledge of full-stack development with Angular and GraphQL.

Ahmed Bouchefra is a software developer and technical author with an engineering degree in software development. He is an expert in web development using modern technologies such as Angular and Node.js, along with using traditional technologies such as Python and Django. He's an open-source, developer, and maintainer of multiple open source Angular libraries, such as ngx-qrcode2. He also currently writes tutorials about modern web development on techiediaries and other industry-leading websites.