Speed Up Your Python with Rust: Optimize Python performance by creating Python pip modules in Rust with PyO3 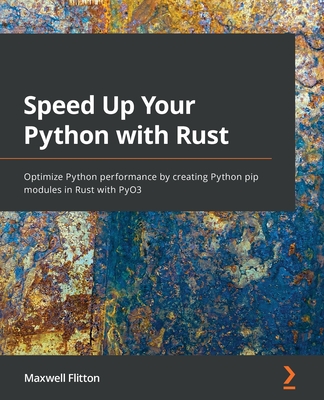 Python has made software development easier, but it falls short in several areas including memory management that lead to poor performance and security. Rust, on the other hand, provides memory safety without using a garbage collector, which means that with its low memory footprint, you can build high-performant and secure apps relatively easily. However, rewriting everything in Rust can be expensive and risky as there might not be package support in Rust for the problem being solved. This is where Python bindings and pip come in.

This book will help you, as a Python developer, to start using Rust in your Python projects without having to manage a separate Rust server or application. Seeing as you'll already understand concepts like functions and loops, this book covers the quirks of Rust such as memory management to code Rust in a productive and structured manner. You'll explore the PyO3 crate to fuse Rust code with Python, learn how to package your fused Rust code in a pip package, and then deploy a Python Flask application in Docker that uses a private Rust pip module. Finally, you'll get to grips with advanced Rust binding topics such as inspecting Python objects and modules in Rust.

By the end of this Rust book, you'll be able to develop safe and high-performant applications with better concurrency support.

This book is for Python developers who want to speed up their Python code with Rust and implement Rust in a Python system without altering the entire system. You'll be able to learn about all topics relating to Rust programming. Basic knowledge of Python is required to get the most out of this book.