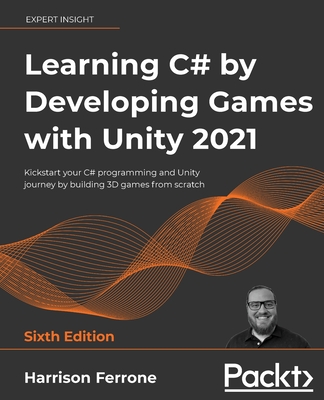 The Learning C# by Developing Games with Unity series has established itself as a popular choice for getting up to speed with C#, a powerful and versatile programming language with a wide array of applications in various domains. This bestselling franchise presents a clear path for learning C# programming from the ground up through the world of Unity game development.

This sixth edition has been updated to introduce modern C# features with Unity 2021, including the new Unity Input Manager and animating with code. A new chapter has also been added that covers reading and writing binary data from files, which will help you become proficient in handling errors and asynchronous operations.

The book acquaints you with the core concepts of programming in C#, including variables, classes, and object-oriented programming. You will explore the fundamentals of Unity game development including game design, lighting basics, player movement, camera controls, and collisions. You will write C# scripts for simple game mechanics, perform procedural programming, and add complexity to your games by introducing smart enemies and damage-causing projectiles.

By the end of the book, you will have developed the skills to become proficient in C# programming and built a playable game prototype with the Unity game engine.

If you're a developer, programmer, hobbyist, or anyone who wants to get started with C# programming in a fun and engaging manner, this book is for you. Prospective Unity game developers will also find this title useful. No prior experience in programming or Unity required.