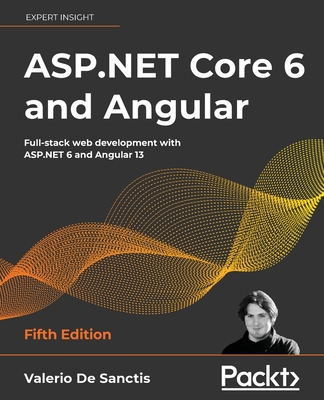 Every full-stack Ninja needs the tools to operate on frontend and backend application development. This web app development book takes a hands-on project-based approach to provide you with all the tools and techniques that web developers need to create, debug, and deploy efficient web applications using ASP.NET Core and Angular.

The fifth edition has been updated to cover advanced topics such as Minimal APIs, Web API with GraphQL, real-time updates with SignalR alongside new features in .NET 6 and Angular 13.

You begin by building a data model with Entity Framework Core, alongside utilizing the Entity Core Fluent API and EntityTypeConfiguration class. You'll learn how to fetch and display data and handle user input with Angular reactive forms and frontend and backend validators for maximum effect.

Later, you will perform advanced debugging and explore the unit testing features provided by xUnit.net (.NET 6) and Jasmine, as well as Karma for Angular. After adding authentication and authorization to your apps, you will explore Progressive Web Applications, learning about their technical requirements, testing processes, and how to convert a Standard Web Application to a PWA.

By the end of this web development book, you will understand how to tie together the frontend and backend to build and deploy secure and robust web applications.

This book is for experienced ASP.NET developers who already possess some familiarity with ASP.NET Core and Angular and are looking to learn how to use them effectively together.

The fully documented code samples (also available on GitHub) and the step-by-step implementation tutorials make this book easy to follow.