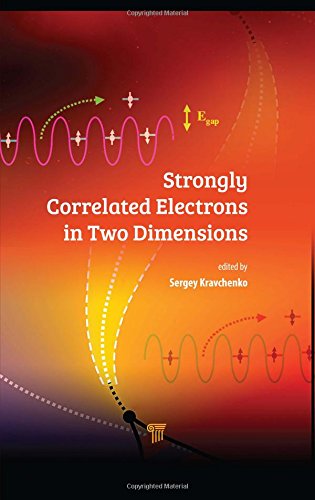 The properties of strongly correlated electrons confined in two dimensions are a forefront area of modern condensed matter physics. In the past two or three decades, strongly correlated electron systems have garnered a great deal of scientific interest due to their unique and often unpredictable behavior. Two of many examples are the metallic state and the metal–insulator transition discovered in 2D semiconductors: phenomena that cannot occur in noninteracting systems. Tremendous efforts have been made, in both theory and experiment, to create an adequate understanding of the situation; however, a consensus has still not been reached.

Strongly Correlated Electrons in Two Dimensions compiles and details cutting-edge research in experimental and theoretical physics of strongly correlated electron systems by leading scientists in the field. The book covers recent theoretical work exploring the quantum criticality of Mott and Wigner–Mott transitions, experiments on the metal–insulator transition and related phenomena in clean and dilute systems, the effect of spin and isospin degrees of freedom on low-temperature transport in two dimensions, electron transport near the 2D Mott transition, experimentally observed temperature and magnetic field dependencies of resistivity in silicon-based systems with different levels of disorder, and microscopic theory of the interacting electrons in two dimensions. Edited by Sergey Kravchenko, a prominent experimentalist, this book will appeal to advanced graduate-level students and researchers specializing in condensed matter physics, nanophysics, and low-temperature physics, especially those involved in the science of strong correlations, 2D semiconductors, and conductor–insulator transitions.