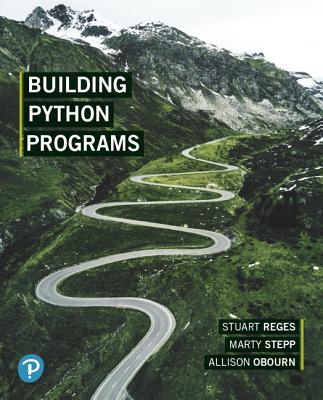 NOTE: This loose-leaf, three-hole punched version of the textbook gives students the flexibility to take only what they need to class and add their own notes - all at an affordable price.

For courses in Java programming.

The authors of the long successful title, Building Java Programs, bring their proven and class-tested, back-to-basics strategy to teaching Python programming for the first time in Building Python Programs . Their signature layered approach introduces programming fundamentals first, with new syntax and concepts added over multiple chapters. Object-oriented programming is discussed only after students have developed a basic understanding of Python programming. This newly published textfocuses on problem solving with an emphasis on algorithmic thinking and is appropriate for the two-semester sequence in introductory computer science.

Stuart Reges is a Principal Lecturer in the Paul G. Allen School of Computer Science and Engineering at the University of Washington. He manages the introductory programming classes, participates in the design of undergraduate curricula, and is involved in K-12 outreach. He held similar positions at Stanford University and the University of Arizona in a career spanning 30 years. In 1985 he won the Dinkelspiel Award for Outstanding Service to Undergraduate Education at Stanford. In 2012 he won the Distinguished Teaching Award which is the highest award given by UW for teaching.