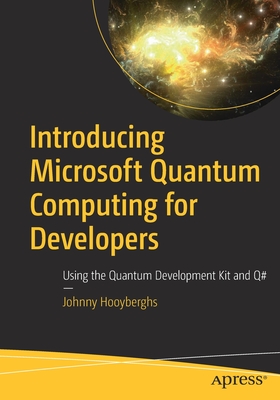 Dive in with this hands-on introduction to quantum computing with the Microsoft Quantum Development Kit and Q# for software developers.

You may have heard about quantum computing, but what does it mean to you as a software developer? With many new developments, a resurgence in interest, and investment by some of the largest tech companies in the world to be the first to market with quantum programming (QP) hardware and platforms, it is no longer a tool in the distant future. Developers are at the forefront, now able to create applications that take advantage of QP through simulations. While the skill is of interest, for many developers, quantum computing and its implications still remains a mystery.

In this book, you will get up to speed exploring important quantum concepts and apply them in practice through writing actual quantum algorithms, using the Microsoft Quantum Development Kit. Theoretical knowledge about quantum physics, such as superposition and entanglement, will be used to explain quantum computing topics, including quantum gates, quantum circuits, and quantum algorithms. Finally, take a tour of the new Azure Quantum.

Use Q#, Microsoft's new programming language, to target quantum hardware. You will select your supporting language of choice, either C# or Python, to begin writing your quantum applications. Combined with just enough theoretical preparation, you will learn how to get your computer ready to simulate basic quantum programs using Microsoft Visual Studio or Visual Studio Code and Q#.

Who This Book Is For
Developers who are interested in quantum computing, specifically those software developers who are planning on using quantum computers in the future. Basic imperative programming knowledge is useful to understand the syntax and structure found in the Q# programming language. Knowledge of Microsoft C# or Python is not required since these languages are only used to support the simulation of Q# on a classical computer.

Johnny Hooyberghs is a consultant for Involved, a Belgium based company centered on the design, development, and delivery of custom made software, where his expertise has been on .NET architecture and backend development. Since 2020, Johnny is a Microsoft Most Valuable Professional (MVP) in the category of Developer Technologies. He has been passionate about .NET from its first release and possesses a deep knowledge of C#, .NET, .NET Core, ASP.NET, Entity Framework, Azure and ALM using the Microsoft Stack. He enjoys the occasional web development using JavaScript. For more than a decade, he has allocated a portion of his free time to teaching .NET and C# for the adult education institute CVO Antwerpen. When he is not working or teaching, he can be found gaming, scuba diving, learning to play the piano, traveling the world and visiting as many theme parks as possible.

Part I: Introduction to Quantum Computing

Chapter 2: The Qubit and Quantum State

Part IV: What to do next?