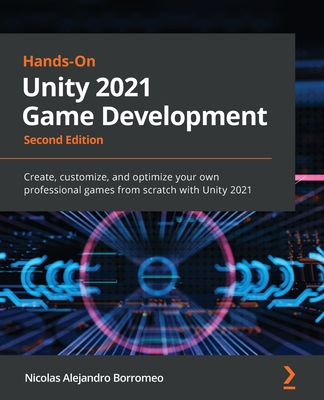 Unity is a comprehensive yet simple suite of tools for developing video games. You can use Unity to not only create video games, but also AR/VR experiences, complex simulations, real-time realistic rendering, films, and practical games for training and education. With this book, you will get to grips with creating a full game from the ground up, building it step-by-step and applying your knowledge as you progress.

Complete with hands-on tutorials and projects, this easy-to-follow guide will teach you how to develop the game using several Unity tools. As you advance, you will learn how to use the Unity engine, create simple scripts using C#, integrate graphics, sound, and animations, and manipulate physics to create interesting mechanics for your game. You'll be able to apply all the knowledge that you gain to a real-world game. Later chapters will show you how to code a simple AI agent to challenge the user and use profiling tools to ensure that the code runs efficiently. Finally, you'll work with Unity's AR tools to create AR experiences for 3D apps and games.

By the end of this Unity book, you will have created a complete game and built a solid foundation in using a wide variety of Unity tools.

This Unity engine book is for game developers looking to migrate to the Unity game engine. If you are a developer with some exposure to Unity, this book will help you explore its latest features. Prior experience with C# programming is required to get the most out of this Unity game development book.

Nicolas Alejandro Borromeo works as a senior Unity developer at Product Madness, London. He was a game development career coordinator at Universidad Argentina de la Empresa (UADE) and has taught game development at many other Argentine universities, such as UTN, UAI, and USAL, and institutions such as Image Campus and DaVinci, since 2012. Nicolas has been a Unity Certified Instructor since 2019, teaching high-profile Unity clients all around the globe. He was an MMO client-side developer at Band of Coders in Argentina and has been a Unity freelance developer since 2012.